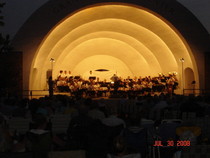 The Sterling Silver Cornet Band was active in the 1850s.  The band participated  in the first Republican Rally to be held in Whiteside County on July 18, 1856. The main orator was Abraham Lincoln.
The next band organized was the Keystone Band, sponsored by Keystone Manufacturing in the late 1870s. This band was rated the best in Illinois in a contest held in Dixon. The band was under the direction of John Kadel for 21 years. Kadel also directed the 6th Regimental Band of Illinois at the time of the Spanish-American War.

The Sterling Municipal Band was organized and first directed by  Jake Hitzelberger, a former circus band director, around the turn of the century.  Mr. Hitzelberger played Taps at the burial of his predecessor, John Kadel.