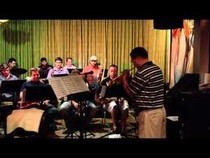 The Fred Cantu Big Band plays 1 Thursday a month at Redmond's Pub in Chicago, IL.  They play original Big Band charts by Raphael Crawford, and charts from the Clark Terry BigBand, Woody Herman, Maynard Ferguson, and many more.  We have some of the cream of the crop musicians of Chicago.  Right off the I-55 expressway, South on Central and East on Archer on the left. $5 dollar cover.  Come down and hear this great group of guys and support Big Band music because it's a small world.

Your form message has been successfully sent.

You have entered the following data: